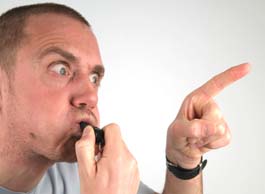 This article was first published by HR Executive Online on April 10, 2013.

Mike Rice, the former men’s basketball coach for Rutgers University, has been plastered and chastised in the media for exhibiting abusive behavior toward his players that included homophobic slurs. After a fine and three-game suspension four months ago, he was fired when a video of his actions surfaced. No one can argue that his stunning behavior was acceptable. Yet the question remains: would addressing his behavior early on have made the difference? Was the coach coachable?

Workplace bullying is rampant. According to a Workplace Bullying Institute survey, “more than a third of adult Americans report being bullied at work, and 15 percent witness it and are made miserable.”

Sadly, most of us don’t know how to counter the bully’s bad behavior. Oftentimes, the bully is a star performer, making it even harder for both management and human resource executives to confront the looming problem.  Employers frequently don’t act, even though keeping an abusive leader onboard is often more risky and costly than pursuing solutions.

But something needs to be done when abusive behaviors frighten others and create a toxic work environment. Wounds inflicted on others can linger and produce intense emotional distress.

The first thing human resource executives can do is to understand what makes a bully tick, and know when calling in an executive coach is a viable course of action.

In the case of Rice, he had two distinct problems, one of which is coachable and the other is not. The homophobic slurs are a telltale sign that certain aspects of his thinking are past the point of executive coaching. When I read about this, I immediately thought he needs to see a therapist. Coaching cannot help — coaching is not therapy.

But if the deep-seated prejudices are absent from the behavioral equation, there is a process executive coaches can apply to improve abrasive leader behavior.

We are all born with the Threat –> Anxiety –> Defense mechanism, which is the core of the problem. Bullies — whom executive coaches label “abrasive leaders” — are hyper-alert to any and all challenges to their position, success, self-perception and authority — we could say they see each threat as equivalent to being attacked by a lion in the jungle. Second, because they have misdiagnosed the threat, their anxiety levels are out of sync with the threat itself. “There’s a lion about to attack me — I should be anxious, my heart is racing for a good reason, and I had better do something quickly, or else I’ll be dead.”

From past experience, abrasive leaders learned to survive by deploying these same behaviors and will defend against any threats to the way they are accustomed to achieving success. Surely, the evidence shows their behaviors have worked — winning records, high share prices, one promotion after another, respect — so why should they change? Abrasive leaders are oblivious to the impact of their behavior on others. Usually they are not bad people. They act inappropriately in pursuit of a goal or a reaction to a threat. For them, survival and winning are everything, and they will get there through dominance.

Abrasive leaders can change once they realize what is leading to their inappropriate behaviors.

How I address these inappropriate behaviors is quite straightforward — I speak with the manager’s manager, co-workers, staff, clients and sometimes even the spouse or another family member — and ask a simple question about the subject’s behavior. As a coach, I ask: “Would you please share with me your perception of the strengths and weaknesses of Joe’s management style and the way he interacts with others?” Once I’ve completed this task, I construct themes to depict the essence of the misbehaviors. I read the edited comments to my clients (you want to edit carefully to avoid any possibility of attribution, but not so much as to lose the essential point) and gauge their reactions. For most abrasive leaders, this will be the first time they have heard what others think of them. And while the client might disavow what they hear, they cannot deny that perceptions are reality, and this is how others view them.

Once they see the damage they cause, many abrasive leaders will want to change because it was never their intention to harm anyone in their quest to achieve their goals. At this point, they are willing to engage in role-playing exercises to reshape their behavior.

An investment in coaching can help companies restore civility, avoid costly turnover and possibly even prevent litigation. Perhaps Rice is not the right candidate for coaching, but some abrasive leaders are. If an employee is instrumental to the business, executive coaching can help HR executives retain valuable talent while avoiding costly lawsuits and the loss of valuable personnel who suffer under abrasive leaders.