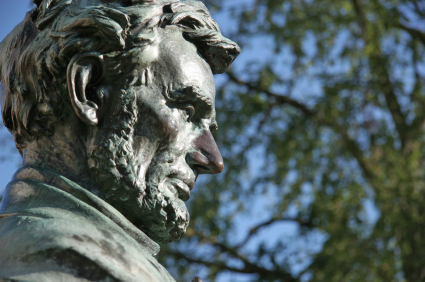 Steven Spielberg‘s movie Lincoln and Doris Kearns Goodwin‘s book from 2005 entitled  Team of Rivals are both respectful appreciations of a quiet man who did extraordinary things.  What are some of the lessons we can extract from a closer look at our 16th president?

According to Bloomberg Businessweek, there are five behaviors of President Lincoln that we would be smart to practice when managing ourselves and others.

What many don’t know — I certainly didn’t — is that the Emancipation Proclamation was issued under Lincoln’s war powers and thus did not establish a ‘legal basis for abolishing slavery across the nation.’   He knew that once the Confederates were readmitted into the Union after the war, ratifying it as an amendment (the 13th) to the constitution would have had no chance of succeeding.  Wisely, Lincoln ‘pushed to get it through Congress before the fighting ended.’  While this meant the Civil War dragged on longer than it would have otherwise by delaying a peace delegation with the Confederates, it ensured the Proclamation would pass.  What a masterful job of understanding your objectives and being able to clearly see how doing one thing allows you to accomplish another.

Even if they don’t trust you or agree with you, as Ms. Goodwin points out, by letting your staff do its work, you can achieve great things you could not do on your own.  I’ve written before about Royal Little, founder of Textron, one of the world’s first conglomerates, who  famously once said that he achieved his successes by hiring people to do what he couldn’t, which was considerable, as it is for most of us.  Ms. Goodwin’s best-selling book tells a fast moving story of how political rivals, working at the behest of President Lincoln, who set the agenda and ‘clarified the moral underpinnings of the Proclamation,’ was able to extract the best from each Cabinet member to allow him to achieve his goals.  Simply, he put the best people in the right jobs and let them figure it out, providing guidance only when necessary.

Don’t get isolated as a leader

One of President Lincoln’s personal strategies was to ensure he did not get too far from the fray personally.  Along with other great managers, he knew how important it was to see for yourself, to touch the people who do the work, and to test what you’ve heard.  In Lincoln, Mr. Spielberg shows the ‘president not afraid to court votes himself from time to time — even meeting with Democrats he knew he had little chance of convincing.’  How difficult but how necessary it is to talk to everyone, even those who disagree with you.  No other way can you exert influence on those who think differently than you.

It’s okay to use anger, but sparingly

Our image of President Lincoln is of a folksy, soft-spoken, backwoods, ax-wielding man of extreme intelligence gleaned from reading the world’s great books by candlelight.  Watching Lincoln you’ll see glimpses of his inner fire, ‘most notably when he loses his temper and delivers a passionate rant about the nobility of the Union cause.’  Why did he express his anger at that moment?  To keep his divided Cabinet from giving up on the amendment.  I can only imagine the emotional intelligence of this man.

Take your job home with you

President Lincoln was very close to his youngest son, Tad, who had a genuine interest in the Civil War and its legacy and purpose.  Innocently, Tad influences his father through their father/son discussions because his conscience ‘reinforced [his] father’s morality.’   Isn’t it a wonderful thing to learn from others when their intent is really just to question?  Often the most innocent question or comment can lead to extraordinary insight and reflection.

We can all learn about being good managers — and good people — by understanding how our late President worked with others, trusted, persevered, loved his family and country, and never lost sight of what he wanted to do.