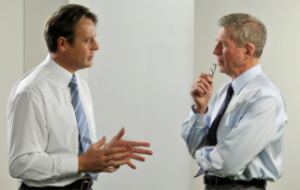 Back in 2007 William Ury published The Power of a Positive No.   Ury at the time was best known for co-writing Getting to Yes:  Negotiating Agreement Without Giving In.

I am writing today about his 2007 work because I sense among my friends and colleagues that they cannot say ‘no’ to anyone about anything, putting themselves in the untenable position of acquiescing to a new commitment about which they have little belief.  Doing so creates anxiety-producing internal dissonance and eats away at one’s self-esteem.  But in today’s economic and job climate, the last thing someone wants to say to his or her boss is ‘no.’

Yet if you did say ‘no,’ there’s a very good chance you would be respected for it and not regret doing so.  Saying ‘no’ is merely part of a conversation, which can be far ranging.  You reach this point by not making the ‘no’ personal — rather, it’s directly related to the specific question, issue, subject and idea immediately at hand.  You make loud and clear your support for the organization — that is incontrovertible ; similarly, you also remark that you want to do the best possible job for your manager.

The ‘no’ ends-up being a thoughtful decline instead of folding your arms in disagreement.  Ury writes that one response that works when wanting to say ‘no’ is: “I would rather decline than do a bad job.”

Saying ‘yes’ to the right things and ‘no’ to the wrong things will distinguish you and strengthen your relationship with your managers, peers and subordinates.  It might also give  you the free time you so desperately seek.