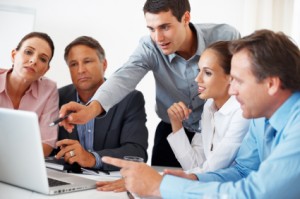 Last week I wrote about the results of a poll taken during my presentation to the LinkedIn group HR.com.  Quickly summarizing the results, there is:

At the close of the blog, I said:  “And while problems with technology are simple to remedy, people challenges are not.  Therein lies success, which will be explained in more detail next week.”  So this blog will briefly outline how to address the people side of the relationship.

Despite years of working hard at IT implementations, results have not shown much improvement and frustration levels are quite high.  What we’d expect, because technology is becoming easier to deploy, is that there would be more success.  Instead, IT has become more proficient at the basics — laptop maintenance, customer support, service management, and communication networks, to name a few.

But these are just the starting points, the infrastructure, the plumbing.  None of them is strategic, and none lead to competitive differentiation or advantage.

Let me cite one example from my experience last summer:  I was working as a consultant for one of the largest US government agencies, which was undergoing a complete systems and software replacement.  Our remit was to identify the shortcomings in their migration plan to avoid surprises.  However, and this was an early alarm that should have gone off more loudly at the time, we were not allowed to speak to the technologists directly.  Rather, we had to submit questions and were not allowed to have joint meetings with the business and technologists.
These rules were at the behest of the business which said it was too busy.  No communication yielded no results.  Needless to say, funding was eventually revoked and our project ended early.  Clearly, the outcome was not a result of technology problems; rather, it was due to a dysfunctional relationship between the users and the developers. Technologists and their business partners must work with each other on joint strategies and maintain open relationships if they want to be on the same track.

What can we do?  A recent analysis by McKinsey explained that success lies in at least three people-oriented areas:

Fortunately, not all is lost.  Just like friendships can be mended and saved, so too can the IT/business manager relationship.  Of the companies that are excelling, 86% say their CEO is a champion in the use of IT to achieve corporate strategy and 77% of top performers have a single, multi-year roadmap shared broadly with the organization.

You want to ensure business and IT leaders interact regularly, preferably in a structured setting, during which real issues are discussed; give technologists a non-titular seat at the planning table; and bring in technology as early in the process as possible as their lead times tend to be lengthy.

Top performing companies see the benefit of open and ongoing communication and discussions between users and providers of services, which is directly related to achieving the targeted ROI.