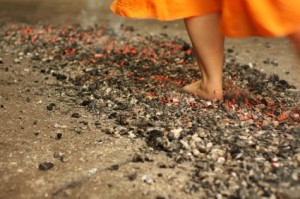 Have you ever thought about walking on hot coals and what would happen to your feet?  I always thought not getting burned was a trick.  But it seems some people gave it a shot last month in San Jose, California, and they got burned.  Are we surprised?

In the New York Times of August 4th, Oliver Burkman writes of “The Power of Negative Thinking,” referencing the walking-on-coals event called Unleash the Power Within, led by the motivational speaker Tony Robbins.  According to Mr. Burkman you can really can walk on hot coals without burning your feet as long as you know how — and that is with ‘quick, light steps’ because coal (surprisingly to me) is a poor conductor of heat.  (I’m still not going to try it.)

His larger point — and the intent of my writing — is that we hear so much about our ‘mind set’ and the ‘power of positive thinking’ that it can fool us into believing we can ‘will’ an outcome merely by believing in it.  That anything is possible as long as we think  about it the right way.

Unfortunately, that attitude can lead to disappointment and lower self-esteem when you don’t achieve the expected results.  To cite some surprising facts from Mr. Burkman’s article:

How is this all related to coaching and behavior?  While it’s important in life to balance the positive and the negative, it is more essential to approach our existence with ‘an openness to failure and uncertainty.’  By facing potential adversity, the ‘sobering picture’ reduces anxiety about the future.  As a manager, you don’t want to ‘stamp out negativity;’ rather you want to be prepared for reality, which means not everything is going to work out, nor is everything going to be a failure.  Teaching these lessons to others is included in the role of an excellent manager.